So I finally finished page 3, ok not finished but the outline for the top of the design is all done. I was hoping to get page 4 done as well, but we were lucky enough to get tickets to see Harry Potter before its general release so I didn’t have time to start it before i moved on.

I also have stitched some more outline of a chart that i am doing for someone, not saying which is just yet, (but you might be able to tell as it grows) stitched on 28ct i wanted to get all the black done on this page before I moved onto something else, but yet again NO TIME ARGH!!!

I have to stitch an christmas ornament for a exchange of facebook I have not done one in years so i thought i would give it another go, anyway after WEEKS of changing my mind, not knowing what i am going to stitch i have finally made my mind up, but its not everyones cup of tea so hoping i have made the right decision,

will post a picture of it tomorrow… still not sure though

What You Looking For? 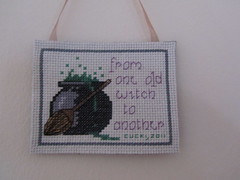 How Long Have I Been Blogging?